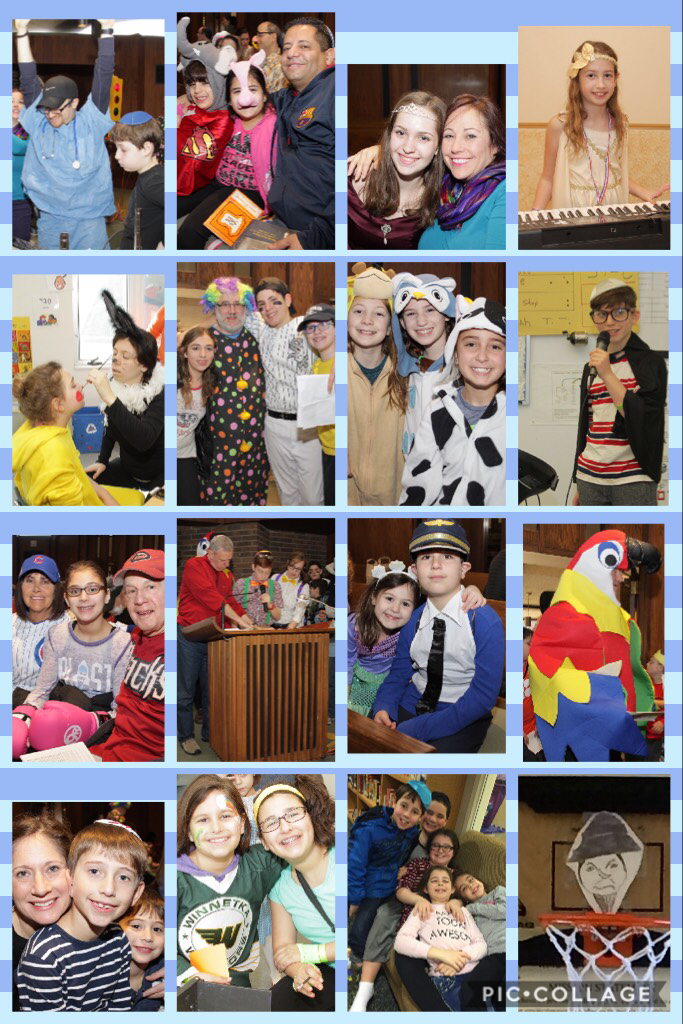 We will send you a separate email regarding our upcoming Grandparents/Special Visitors Day.  Thank you very much for working with us and sharing your feedback with us as we learn continue to build this play group with you.  We had a lot of fun playing and singing with you this past week.  -Mr. Sherman

We read a Sammy Spider book that introduced the holiday of Passover to the children.  I also asked the children if they knew the definition of the words Seder (order) and Haggadah (the book that has the story of Passover in it).  The children finished up their sticker books that was all about performing Mitzvot.  During Tefillah, the children as always enjoyed learning and practicing with Mr. Marc and Mr. Sherman. -Morah Lynn

This week the Aleph and Bet students began learning about Passover. We talked about Elijah the prophet, created a cup for our sedar tables, and began learning how to sing the 4 Questions. The students also got to have a special experience while reading a story with a Dalet buddy after Tefillah. -Mrs. Berlow

This was our fourth and final week of hakarat hatov, and our focus was on giving back!

Recap: We recognized the people and places that have helped and supported us and we thought of ways we can give back. We started by reviewing the cards we made for family members and/or friends last week, and talking about how that experience made us feel.  We then participated in a short text study about how actions speak louder than words.  Next, we watched a video about the importance of words and how, when used correctly, they can have a big positive impact.  Finally, we spent time brainstorming ways our students can give back to the community.  We brainstormed mitzvah projects that the students can complete on their own, as well as those projects that they can do with their families.  We will ask students to update us on their progress throughout the rest of the year.

Table Talk: Discuss ways your student and you will “give back.”

Login to My.ShalomLearning.org and watch the video in preparation for the next lesson.  While you watch the video, reflect on the following: How did the kids “give back” to others? Who and where were the kids helping?

Next week we will introduce the concept of Koach HaDibbur, translated as “The power of speech.”  Students will get to know the meaning of the phrase and how it relates to the previous values they have learned thus far this year.  The students have a chance to create their own brit, a contract for how to use their own speech.

This week the students delved into the Haggadah, the book we use during the Passover seder.  The students took an in-depth look at the 4 Questions (the Ma Nishtanah) and both read and sang these.  Please have you student practice these every day at home.

Additionally, we continued to work on the V’ahavta and the Vayomer.

Lastly, we took an in-depth look at the Amidah prayer, and how it relates to our topic of Hakarat Hatov.

Have a great week!  Please note that there is no SJS on Sunday, March 26, Wednesday, March 29 or Sunday, April 2 for Spring break.  We will resume SJS on Wednesday, April 5.

After a quick review of Moses’ encounter with the burning bush, we went through an exercise in pairs. Each partner described a time when they saw something unusual and how they reacted. After both partners had described their experiences, they considered the differences and similarities between their own experiences and Moses’, then talked about which one was more similar. Exercises like this allow us to empathize with the characters of the Torah and internalize their narratives.  -Hazzan Szenes-Strauss (Mr. S.)

We studied the story of Pesach and the names of the holiday.   We also looked at the importance of freedom for human beings and the preparation for the holiday,

Finally, we discussed the decree of King Pharaoh killing every Israelite boy in the river.  We also looked at the 10th plague; the killing of the first born.  We practiced the Kiddush and I showed the students that two of the traditional four names of the holiday are in it.  -Mrs. Moustakis

Students enumerated, in writing, the ways in which they are blessed: their abilities, relationships, and property. Students then considered ways in which they could potentially use their own blessings to help alleviate food insecurity in the community around them. This is the beginning of a project that will expand over the next few weeks (spring break aside), and hopefully extend into the home. -Hazzan Szenes-Strauss (Mr. S.)

This past week in Ta’amei haMiqra, the students studied a sheet with the names of all the Torah trope. -Mr. Lerner

We spoke about Pesach literally as how G-d passed over certain homes and the symbol of the blood on the doorposts of the Israelite’s homes.  We made the connection of how today we have the mezuzah to declare a Jewish home.  I wish everyone a healthy and safe vacation.  -Mrs. Moustakis

We reviewed the 14 steps of the seder and also the ten plagues in Hebrew. First, we read them together, and then each student read them on his own.   -Morah Anna & Mrs. Rosenfeld

Students continued to practice reading from our siddur. The rule for this class was to avoid pieces of liturgy we already know very well, which are easy to read but not necessarily the best avenues for growth. Some groups of students fanned out into the hallway and nearby vacant classrooms so that everyone could practice out loud without interfering with other groups. -Hazzan Szenes-Strauss (Mr. S.)

This past week in Yeshivat B’nai Mitzvah, the students studied a sheet with the names of all the Torah trope. -Mr. Lerner

Today we started to learn about Passover. We learned how Joseph chose the land of Goshen for the Jewish people to settle in. We also spoke about the power Joseph had in Egypt and how a Jew was “like Pharaoh.”  We continued our Israel unit learning about the founder of modern Zionism, Theodor Herzl. We will continue next week learning what motivated him and all his accomplishments. -Mr. Arnet

This week most of our students had the chance to give their hero presentations. We heard about an impressive range of politicians, activists, civil servants, and artists who made a difference in the world. I am looking forward to class two weeks from now, when those who did not have a chance to present will get their opportunity. -Hazzan Szenes-Strauss (Mr. S.)

Today we started to learn about Passover. We learned how Joseph chose the land of Goshen for the Jewish people to settle in. We also spoke about the power Joseph had in Egypt and how a Jew was “like Pharaoh.”  We continued our Israel unit learning about the founder of modern Zionism, Theodor Herzl. We will continue next week learning what motivated him and all his accomplishments. -Mr. Arnet

Today we started to learn about Passover. We learned how Joseph chose the land of Goshen for the Jewish people to settle in. We also spoke about the power Joseph had in Egypt and how a Jew was “like Pharaoh.”  We continued our Israel unit learning about the founder of modern Zionism, Theodor Herzl. We will continue next week learning what motivated him and all his accomplishments.  I asked the kids to please write two paragraphs about Theodor Herzl. There will be a reward for any or all the kids who take the time to learn about Theodor Herzl and all he accomplished.  -Mr. Arnet

The guest speaker at the JUF brunch was Jane Eisner, editor of The Forward.  She spoke of the increase in antisemitic incidents nationwide and the numerous hate-filled e-mails that she has recently received.  She attributed much of this venom to the election of Donald Trump, his anti-immigrant rhetoric and recent hires, like Steve Bannon.                    -Cantor Simon